Soulo Mute is a line of professional brass mutes created by a husband and wife team, combining a professional musician’s training, an MBA graduate’s acumen, and a serious dose of curiosity and technical savvy.

It first started in 2009 when, after a rigorous practice for an upcoming performance, trumpet player Mike Jarosz injured his neck. In the months after the injury, when Mike was unable to play, he developed the first prototype of the Soulo Bucket Mute. Although professionally trained as a trumpet player with BA and MA degrees in Trumpet Performance from the University of the Arts in Philadelphia, Mike always had an interest in how things were made. He inherited from his grandfather a garage full of the most obscure, old tools and equipment, which helped him design the unique shape of the first Soulo Mute. 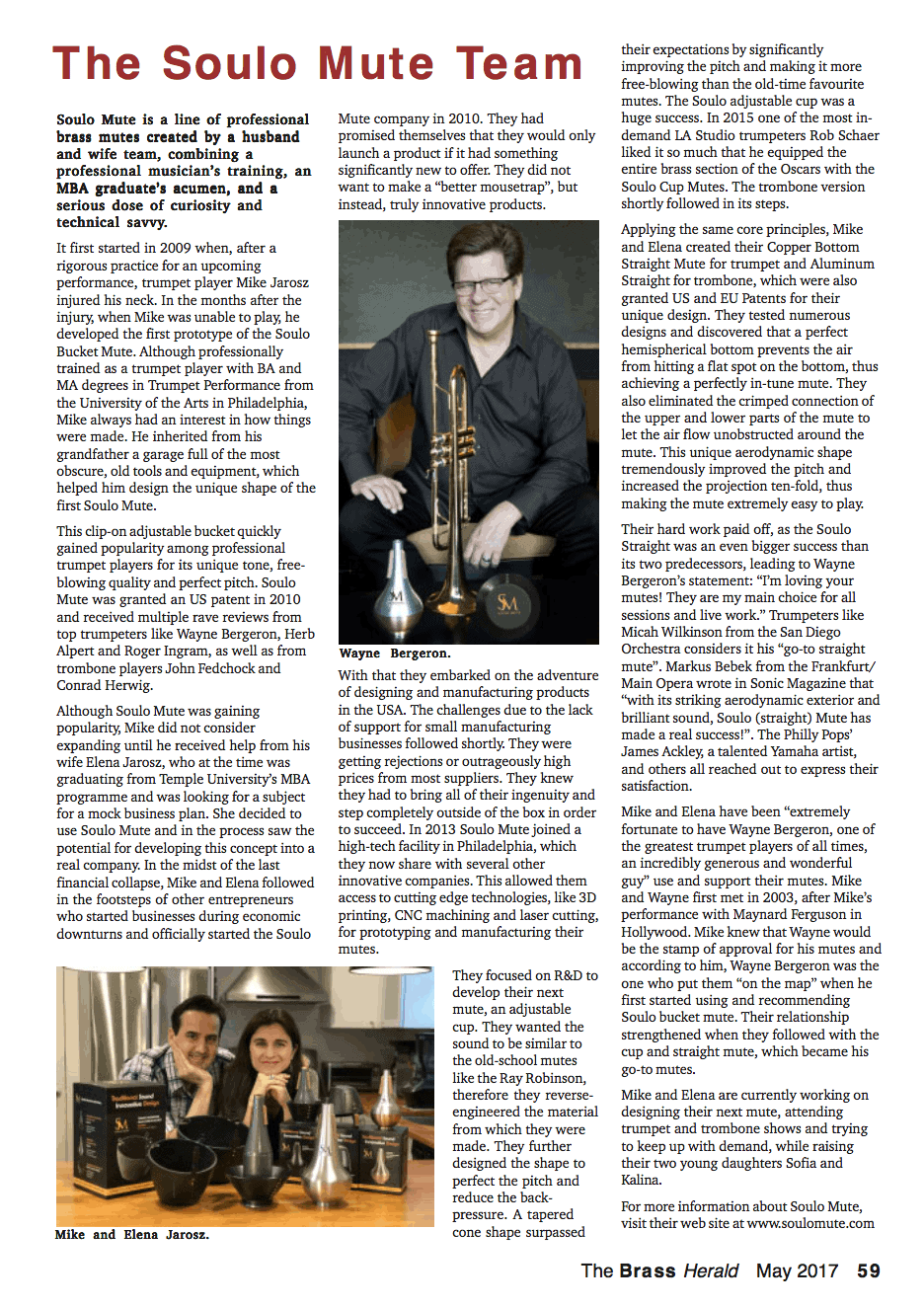 This clip-on adjustable bucket quickly gained popularity among professional trumpet players for its unique tone, free- blowing quality and perfect pitch. Soulo Mute was granted an US patent in 2010 and received multiple rave reviews from top trumpeters like Wayne Bergeron, Herb Alpert and Roger Ingram, as well as from trombone players John Fedchock and Conrad Herwig.

Although Soulo Mute was gaining popularity, Mike did not consider expanding until he received help from his wife Elena Jarosz, who at the time was graduating from Temple University’s MBA programme and was looking for a subject for a mock business plan. She decided to use Soulo Mute and in the process saw the potential for developing this concept into a real company. In the midst of the last financial collapse, Mike and Elena followed in the footsteps of other entrepreneurs who started businesses during economic downturns and officially started the Soulo Mute company in 2010. They had promised themselves that they would only launch a product if it had something significantly new to offer. They did not want to make a “better mousetrap”, but instead, truly innovative products.

With that they embarked on the adventure of designing and manufacturing products in the USA. The challenges due to the lack of support for small manufacturing businesses followed shortly. They were getting rejections or outrageously high prices from most suppliers. They knew they had to bring all of their ingenuity and step completely outside of the box in order to succeed. In 2013 Soulo Mute joined a high-tech facility in Philadelphia, which they now share with several other innovative companies. This allowed them access to cutting edge technologies, like 3D printing, CNC machining and laser cutting, for prototyping and manufacturing their mutes.

They focused on R&D to develop their next mute, an adjustable cup. They wanted the sound to be similar to the old-school mutes like the Ray Robinson, therefore they reverse- engineered the material from which they were made. They further designed the shape to perfect the pitch and reduce the back- pressure. A tapered cone shape surpassed their expectations by significantly improving the pitch and making it more free-blowing than the old-time favourite mutes. The Soulo adjustable cup was a huge success. In 2015 one of the most in- demand LA Studio trumpeters Rob Schaer liked it so much that he equipped the entire brass section of the Oscars with the Soulo Cup Mutes. The trombone version shortly followed in its steps.

Applying the same core principles, Mike and Elena created their Copper Bottom Straight Mute for trumpet and Aluminum Straight for trombone, which were also granted US and EU Patents for their unique design. They tested numerous designs and discovered that a perfect hemispherical bottom prevents the air from hitting a flat spot on the bottom, thus achieving a perfectly in-tune mute. They also eliminated the crimped connection of the upper and lower parts of the mute to let the air flow unobstructed around the mute. This unique aerodynamic shape tremendously improved the pitch and increased the projection ten-fold, thus making the mute extremely easy to play.

Their hard work paid off, as the Soulo Straight was an even bigger success than its two predecessors, leading to Wayne Bergeron’s statement: “I’m loving your mutes! They are my main choice for all sessions and live work.” Trumpeters like Micah Wilkinson from the San Diego Orchestra considers it his “go-to straight mute”. Markus Bebek from the Frankfurt/ Main Opera wrote in Sonic Magazine that “with its striking aerodynamic exterior and brilliant sound, Soulo (straight) Mute has made a real success!”. The Philly Pops’ James Ackley, a talented Yamaha artist, and others all reached out to express their satisfaction.

Mike and Elena have been “extremely fortunate to have Wayne Bergeron, one of the greatest trumpet players of all times, an incredibly generous and wonderful guy” use and support their mutes. Mike and Wayne first met in 2003, after Mike’s performance with Maynard Ferguson in Hollywood. Mike knew that Wayne would be the stamp of approval for his mutes and according to him, Wayne Bergeron was the one who put them “on the map” when he first started using and recommending Soulo bucket mute. Their relationship strengthened when they followed with the cup and straight mute, which became his go-to mutes.

Mike and Elena are currently working on designing their next mute, attending trumpet and trombone shows and trying to keep up with demand, while raising their two young daughters Sofia and Kalina.

For more information about Soulo Mute, visit their web site at www.soulomute.com